DAY #318 WHEN YOUR CHILD FEELS BAD

In E’s words, as she closed our day with prayer, I am off to “dream of all the things we can do and adventure we can have in Ireland.” We flew into Belfast in Northern Ireland, rented a car, and spent the rest of the day driving South to Cork, Ireland, where we rented a cottage in Castletownbere.

Without much ado, let’s hop right into the top ten list! 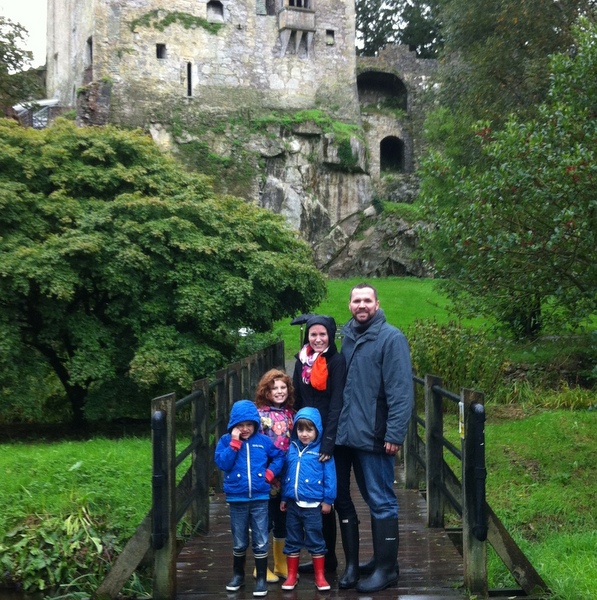 ‘Tis there’s the stone that whoever kisses
He never misses to grow eloquent;
‘Tis he may clamber to a lady’s chamber (ahem….sorry),
Or become a member of Parliament.
A noble spouter he’ll sure turn out, or
An out and outer to be let alone;
Don’t try to hinder him, or to bewilder him,
For he is a pilgrim from the Blarney stone.

The ritual of kissing the Blarney Stone has been performed by “millions of people”, including “world statesmen, and legends of the silver screen.” The kiss, however, is not casually achieved. ‘To touch the stone with one’s lips, the participant must ascend to the castle’s peak, then lean over, backwards, on the parapet’s edge. Prior to the installation of the safeguards, the kiss was performed with real risk to life and limb, as participants were grasped by the ankles and dangled over the edge (http://waymarking.com).

Not exactly my experience. Nor Bryant’s. And the children were not allowed to “dangle” at all, though their ascent to the castle’s peak seemed enough “risk to life and limb.”

We absolutely loved Blarney! And not just the kissing of the Blarney Stone, but the gardens surrounding the castle were so well kept and child-friendly. The kids ran in and out of tunnels and ruins, and they even found a cave on the grounds. And, to top off the day-out, there’s an ice cream parlor and gift shop near the entrance.

DINGLE, in Cork was a charming village, in its own right. We did most of our souvenir shopping in the town center. But, we drove to Dingle with only one idea in mind – to see the dolphin. “Fungie” is a dolphin who has lived in the Dingle harbor since 1983. First of all, who came up with the name Fungie for a bottle-nosed dolphin? Poor thing. Second, why would a wild dolphin hang around a populated harbor, alone, for forty years? Legend has it – and there are a lot of legends and tall tales this side of the pond – that years ago, a different dolphin, female, was found washed up, dead on the beach in Dingle. Dolphins do not generally mate for life, but some believe that some bottle-nosed dolphins may choose to do so. Convenient for legend, right? Legend follows, Fungie lost his mate and now cannot bear to leave the place he had last known her alive.

True or not, the legend pulled at our own heart strings, as we prepare to leave our home in London, the place we have known our son, Matthew, alive. We thing about him every day. We are grateful he was born into our family. We are so grateful to the Lord for the eternal nature of families.

Once in Dingle, we took a boat out in search of Fungie, but we later learned we could have hiked onto the peninsula for a very similar siting. You can also arrange to go horse-back riding in Dingle. There is a little castle you can go out to, and fun places to eat. And a bronze statue of a dolphin that the kids can play around and ON.

EXPLORING THE ROCKY COASTS was a favourite past time for the children, while still in Cork. The weather was rainy, off and on. The village ice cream parlor was opened daily. As well as the pharmacy and the post office. All our needs could be met in one fell swoop through the village square. And a piece of carrot cake, to finish the morning. Then off to the beach, where we would stay, exploring small inlets and scrambling over the rocky shores, until the sun began to set. We spent hours climbing and jumping, looking for crabs hiding under the large boulders. No one particular beach, just anywhere along the way to anywhere. 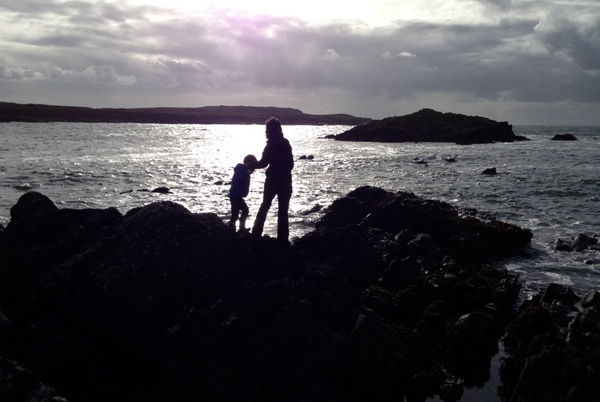 Since many of the other places we wanted to see and experience in Ireland were found quite north of Cork, we spent a day driving back in the direction of Northern Ireland, where we had arranged a cottage near Belfast for the rest of our holiday.

THE CLIFFS OF MOHER were beautiful. Some walking, a nice castle-y looking building, some cows my kids liked watching.

THE BURREN. For lunch we stopped for smoked salmon at a Smokehouse in The Burren. To our delight, the locals were not only known for their smoked fish, but also their chocolates.

I considered it a worthy use of my time on Google one afternoon, some months ago, to search out food and emotional health. Most healthy foods listed by ‘specialists’ would be no surprise to you or me: fish, grapefruit, whole grains, nuts, vegetables, potatoes, chocolate, yoghurt . . . WAIT . . . chocolate? Yes. Dark chocolate, that is. Done! I have since put myself on a dark-chocolate-diet. Butlers Chocolates – Purveyors of Happiness. Ireland’s favourite luxury chocolatier. I have always preferred milk chocolate to dark chocolate, until I initiated the dark-chocolate-diet. Butler’s dark chocolate would convert anyone to dark chocolate, though, even without the emotional health incentive.

DUBLIN was fun, the few hours we spent in the city. We went to all the typical spots – St Patrick’s Cathedral, Ha’Penny Bridge, Trinity College, etc. The children enjoyed the street entertainers more than anything else we planned. You know you haven’t packed enough snacks when you find yourself offering the children chewing gum to appease their appetites. With no chocolate (or chewing gum) left, we arrived at Annagh Cottage in time to carry the children to their beds for the night.

GIANT’S CAUSEWAY, another National Trust site, was our last Irish adventure. 40,000 interlocking hexagonal basalt columns, found along the eastern cliffs of Northern Ireland, make up this “causeway”. It seems, some time ago (a great start to a TALL TALE) the columns were a causeway, built between Ireland and Scotland by one Irish giant, Finn MacCool. Upon being challenged to a fight with the Scottish giant named Benandonner, Finn built the causeway across the North Channel to meet his foe, face to face. But, when Finn, sneaking up on the giant, saw the size of Benandonner, he was scared, and ran back to his Irish home. The Scottish giant was, indeed, much larger than the Irish giant. But, of course, the Irish giant was much much more clever. Finn and his wife disguised Finn as a baby in a cradle. And when Benendonner came to the home, in search of Finn, he found only the wife and the “baby”. Well, thought he, if the baby is this large, how much larger is the father! He must be a giant among giants! Benandonner fled back to Scotland in fright, destroying the causeway behind him so that Finn could not follow.

The visitor’s center and museum at the entrance to the site, was entirely created with children in mind.

Then the Causeway itself was unbelievable! 60 million years old. I could have spent several days there, exploring and taking pictures, climbing rocks, and dipping my toes in the cold cold water. Only it was raining. And, though that made for vivid memories, the exploration had to be cut short. We spent some time in the pub at the entrance to the parking lot, with its large wood-burning fireplace, and its warm Irish Stew (sans the Guinness). I think that pub served some of the best food we enjoyed in Ireland. 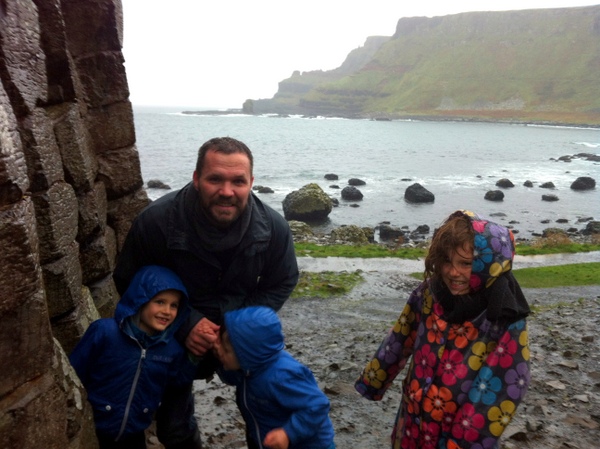 Finally, CHEESE. Some of our very favourite memories from our different European holidays are our visits to the local cheese shops and dairies. Ireland was no exception. Driving north, we passed a little yellow homemade sign, “FARMHOUSE CHEESE NEXT LEFT”. Out of curiosity, we took the next left off the dual carriageway and onto a small gravel road. After driving for some time, we spotted another yellow sign, “FARMHOUSE CHEESE 2km”. It felt like we drove much further than the advertised 2km before we saw a final little yellow sign pointing us toward a lone farmhouse.

Bryant drove us up the dirt driveway, where we were welcomed by a barking dog, and finally an old, long-bearded farmer. He came to us. I was not about to get out of the car to find him.

“Are you here for cheese? Because I sell cheese!”

He informed us that only very special people drive all the way out there, following signs that are “obviously fibbing” (his words), to get a bit of cheese. The cheese was very fine, and the conversation was even finer.

Back at the cottage, the children picked clover from the front walkway, and smashed each carefully between the pages of Anne of Avonlea. Their green crayons were used, down to a stub. And all were ready, with journals and clovers in hand, to return to London.

So closed our Irish holiday – a week of tall-tales and colorful language, beautiful scenery and charming characters.  And they were some wet wet hours, to boot. Ireland, I know why you are so green.

Next AMSTERDAM, The Netherlands

DAY #121 THE SIMPLEST WAY TO CHANGE YOUR DESTINY 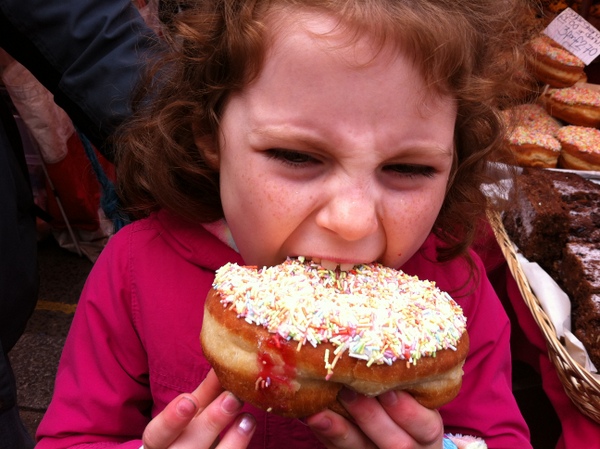