Just off the coast of West Africa, the Spanish Canary Islands are neither anywhere close to SPAIN nor occupied by CANARIES. But it is a lovely place for a warm holiday!

Upon arriving in Lanzarote, L leaned over toward me, “Can I tell you something? Whenever we get into a new home, there is one thing that me and J always need to do – EXPLORE!” 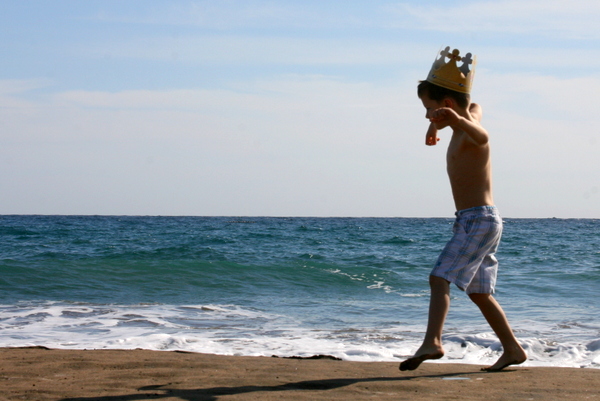 Our plane tickets to the Canary Islands from London cost us £40 per person. Our accommodations were likewise cheap. We were not about to stop the trend by spending extra money to fund our transportation, so we walked. And we did so for days. To the grocery store, to the beach, to the Indian take-out place. We walked, and while we walked, the children would sing, “Keep on walking, keep on walking…”

Walking, we discovered places we didn’t know existed in Lanzarote – places we thought there no need of on a tropical island. Places like an enormous McDonald’s-style jungle-gym, for example. And, after the beach grew cold and dark under the rain clouds, that is exactly where we headed, much to the children’s delight.

The heat in Lanzarote attracted mosquitos. And mosquito bites on top of a light sunburn, drove the children nearly mad!

We took a bus up into the wastelands – the Parque Nacional de Timanfaya. Did you know that NASA used Timanfaya’s lunar landscape to prepare the astronauts of Apollo 17 for their trip to the moon? Yes, the park was created by volcanic eruptions in the 1700s, and ‘lunar’ is a very good description.

There are 120 volcanos that make up Lanzarote.  As a family, we took camels up the side of one volcano, then the bus up the side of another, steeper one.  The camels were far more entertaining, the bus was far quicker.  We would have opted for the camels, any day. 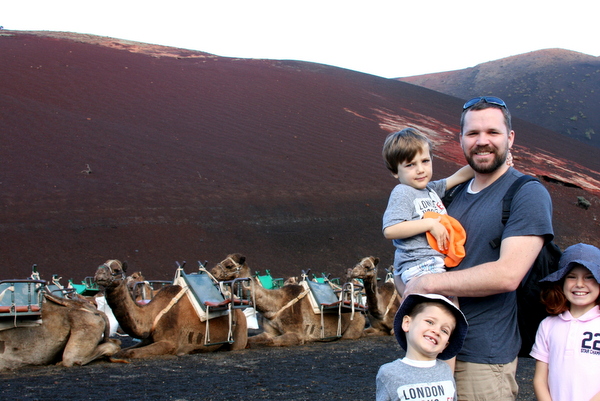 Originally we had planned to hike Montana Roja, the third day of our stay. But, after a 40 minute public bus ride in the general direction of the designated volcano, we determined that our bus would not be dropping us off anywhere close to the base, and changed our plans. And when the bus reached the end of the line, we hopped off and located a bike-rental shop open and ready for business. 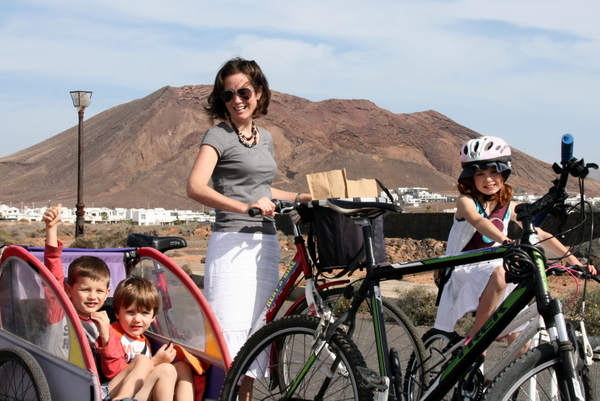 We pedaled until the road ended, and then we took our bikes off-roading until the dry terrain ended, ultimately placing us at the most southern tip of the island. 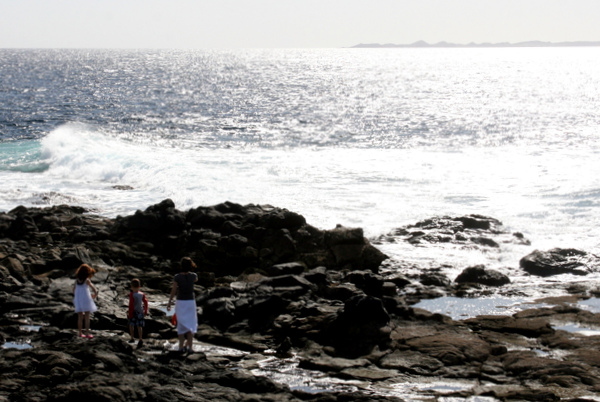 We explored Playa Blanca.  We built rock structures on the beach just north.  The children took pictures of the odd vineyards at La Geria.  We viewed the Fecundidad monument to Cesar Manrique.

The most noteworthy character originating in Lanzarote is this Cesar Manrique. The artist was born in Lanzarote, studied art in Madrid where he met Rockefeller. Rockefeller encouraged him to study and display his art in New York City. This he did, and began a career in the Big Apple.

But, as our bus tour guide explained, Cesar’s heart remained in Lanzarote. And there he returned shortly, to conserve the island’s beauty and traditions, when tourism was first introduced to Lanzarote. Ultimately Cesar was able to influence the laws and regulations that still stand in Lanzarote today, limiting high-rise hotels and large resorts. And the tourist buildings that do exist on the island are painted in the traditional white. White, dotted across the red volcanic terrain. Beautiful.

Home. Cesar Manrique felt drawn ‘home’, leaving behind a budding career in art. And, while we enjoyed the sun, the beaches, the volcanos of Lanzarote, and we made our home amongst the people for the week, our own ‘home’ drew us elsewhere. 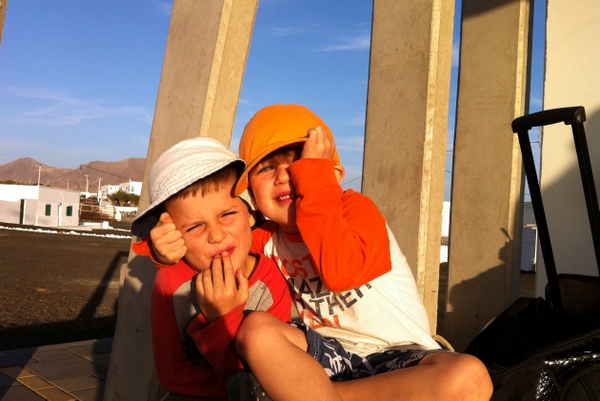 Have you heard this song by Ernie (as in Bert and Ernie)?  One homesick evening, after months of travel, I listened to the lullaby, on repeat, moved by the lyrics:

I’d like to visit the jungle, hear the lions roar
Go back in time and meet a dinosaur
There’s so many strange places I’d like to be
But none of them permanently

Homesick for what? Is ‘home’ a location? Sometimes. Is it a relationship? Many times. Can it be found here and now? I think so. But, it is at times fleeting – a glimpse of another, more enduring ‘home’.

Close to my soul, and yet so far away. I’m going to go back there someday. 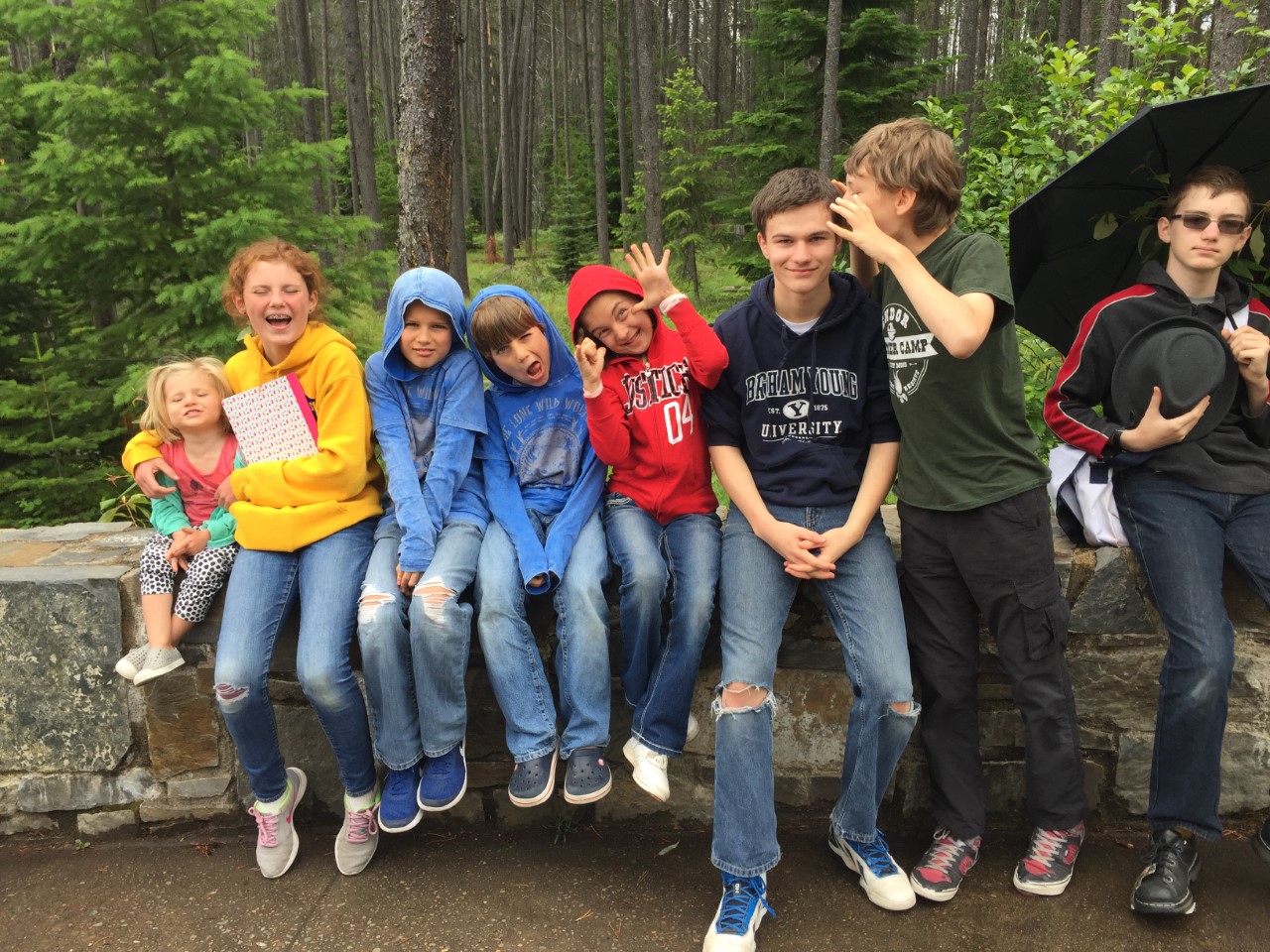