I want to take some time to look at the Prodigal Son this morning, in Luke 15.

A certain man had two sons:

And the younger of them said to his father, Father, give me the portion of goods that falleth to me. And he divided unto them his living.

And not many days after the younger son gathered all together, and took his journey into a far country, and there wasted his substance with riotous living.

And when he had spent all, there arose a mighty famine in that land; and he began to be in want.

And he went and joined himself to a citizen of that country; and he sent him into his fields to feed swine.

And he would fain have filled his belly with the husks that the swine did eat: and no man gave unto him.

And when he came to himself, he said, How many hired servants of my father’s have bread enough and to spare, and I perish with hunger!

I will arise and go to my father, and will say unto him, Father, I have sinned against heaven, and before thee,

And am no more worthy to be called thy son: make me as one of thy hired servants.

And he arose, and came to his father. But when he was yet a great way off, his father saw him, and had compassion, and ran, and fell on his neck, and kissed him.

And the son said unto him, Father, I have sinned against heaven, and in thy sight, and am no more worthy to be called thy son.

But the father said to his servants, Bring forth the best robe, and put it on him; and put a ring on his hand, and shoes on his feet:

And bring hither the fatted calf, and kill it; and let us eat, and be merry:

For this my son was dead, and is alive again; he was lost, and is found. And they began to be merry.

Now his elder son was in the field: and as he came and drew nigh to the house, he heard musick and dancing.

And he called one of the servants, and asked what these things meant.

And he said unto him, Thy brother is come; and thy father hath killed the fatted calf, because he hath received him safe and sound.

And he was angry, and would not go in: therefore came his father out, and entreated him.

And he answering said to his father, Lo, these many years do I serve thee, neither transgressed I at any time thy commandment: and yet thou never gavest me a kid, that I might make merry with my friends:

But as soon as this thy son was come, which hath devoured thy living with harlots, thou hast killed for him the fatted calf.

And he said unto him, Son, thou art ever with me, and all that I have is thine.

It was meet that we should make merry, and be glad: for this thy brother was dead, and is alive again; and was lost, and is found.

I am looking at just one lesson I learned this week from this parable. What’s the problem here with the older brother? He was angry that his father was throwing a celebration for his younger brother, who had been disloyal and wasteful and disrespectful and even an embarrassment to the family.

It seems like the father’s answer to the older brother’s critical inquiries was this: It is his business what he did with his inheritance. It is my business how I reward him and how I reward you. Stay in your own business.

And, of course, this was said in the most kind of words, with the most loving of intentions. And this is very good advice. It is advice I probably have been found giving my own children when they’re not getting along. But how does that brother – that loyal son – work his way through the negative emotions he’s clearly experiencing?

It’s unlikely he thought, “My father is absolutely right! I should stay in my own business! Problem solved!”

I’m sure his father’s words helped him see a little more clearly, but I don’t imagine the struggle would have ended there.

What did the older brother do after this conversation? How did he come to find peace in his own mind?

What would my unintentional model look like, if I were the loyal son?

CIRCUMSTANCE: My brother took $500,000 from my dad. He spent it all and declared bankruptcy. He is now home, and my dad is celebrating.

THOUGHT: My brother should suffer for his disloyalty to our dad.

RESULT: I still have the inheritance, sure. But now I have a strained relationship with my dad and my brother, and those dang servants that attended the celebration. Don’t they see how bad my brother is??

And there are other thoughts the older brother had, other sentences we could have put into the “T” line, like, Dad threw him a party and I’ve never gotten a party. And we could definitely write out a couple other models using other thoughts and feelings. And when we are experiencing thoughts in a circumstance, we could really break them up and do a model for each, on our own. That would serve us well. But, for time’s sake, let’s just look at the one thought in the above model today from this parable of the prodigal son, My brother should suffer for his disloyalty to our dad.

Is that thought true? Is that thought serving him well? Who would he be if the oler son didn’t believe that thought? Let’s try doing a potential intentional model backwards, starting with the result the brother would likely want in his life.

ACTION: I am waiting with my dad, looking and praying for my younger brother to return. I celebrate with the family when he does return, and I offer my brother whatever I can to help him make the transition back into the family. I celebrate with my father, and we council together on how to best help my brother. I find I am even kinder to the servants who celebrate with us.

CIRCUMSTANCE: My brother took $500,000 from my dad. He spent it. He declared bankruptcy. But he is now home, and my dad is celebrating.

Isn’t that beautiful? Aren’t those beautiful thoughts and feelings, and results? Well, we are not told if this fictional character ever got to that point. If he did, it was likely not shortly after his father corrected him, right?

I, too, as with the older son and the younger son, have been invited to the feast. Do I partake? Am I ready? Am I in that place? Am I thinking those thoughts yet?

I want to close with a quote on charity. What is causing the disparity between the degree of charity and forgiveness I feel today, and true and pure charity – the pure love of Christ? Can I sit where I am at and inquire and lovingly move myself in that most desired direction? 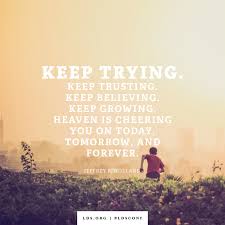 DAY #281 TOMORROW THE LORD WILL DO WONDERS AMONG YOU